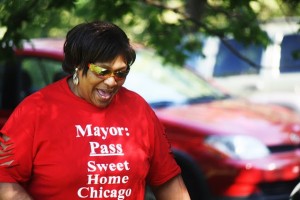 (2009) – Almost every single spot on the walls of Dollie Brewer’s office is covered by newspaper clippings, thank-you letters and photos. Almost every picture shows laughing faces. And one reason why these faces can laugh again is Dollie.

Dollie Brewer, 63, has been a community organizer with the Chicago Coalition for the Homeless (CCH) for the past 12 years. She works with women who are living in temporary shelters. Some of them have experienced domestic violence and illness, others substance abuse. Some of them just couldn’t afford housing any more, because they lost their jobs, or because their jobs don’t pay enough. Almost all of them are moms.

Every month Dollie visits about 15 family shelters in Chicago. She is in charge of the Women’s Empowerment Project, which helps homeless mothers and their children build self-esteem, and educates them about their rights. “When a person knows that someone cares, they can turn their life around,” Dollie says.

“Homelessness does not mean hopelessness” is one of the first statements Dollie makes whenever she meets with a new group of women in a shelter. “Does that make any sense at all?” she asks. Most of the women are reluctant to answer. They keep their arms folded, and they avert their eyes.

Every time, this dismissive behavior changes abruptly when Dollie tells them: “I am a mother of eight, and a granny of 26, and I have been homeless myself!” Now the women know that they are not talking to someone who just picked something out of a book.

Dollie Brewer’s story of homelessness began when her husband became ill and they had to sell the houses they managed. In December 1995 the family’s home caught fire and was destroyed.

After living in an emergency apartment for six months, the Brewers were supposed to live off retirement income, but the $1,700 a month they received was not remotely enough for a family in suburban Oak Park with eight children in high school and college.

Five of the children were still living with their parents, but no shelter was willing to accept a family with so many teenagers. But Dollie did not want her family to be separated. So the Brewers moved into an abandoned building on Chicago’s West Side and lived for more than half a year in an apartment without electricity, using water from a garden hose in the basement. When winter came, they heated the rooms with a kerosene-powered generator.

Dolly can still remember the day she received an invitation to a meeting of the Women’s Empowerment group: “It was January 26th, 1997, the coldest day of the year with a wind chill of 50 degrees below zero.”

When the women in the meeting were asked to tell their stories, Dollie was not thrilled at all: “Wait a minute,” she said. “I did not come to the Chicago Coalition of the Homeless to tell a story! I need housing!” But today Dollie says she soon discovered that you cannot start a new life without feeling good about yourself. And life changed for Dollie. After she was hired by the CCH, her daughter found an affordable apartment for the family.

It is the story of Dollie overcoming homelessness that makes the women in today’s empowerment group talk about their lives. Queenah is a teenage mom with her little son sitting on her lap and another child on the way. She had to leave home because of a family dispute. Rhonda has always lived with her aunt, but she got cancer and died. Nancy is homeless despite a full time job because she cannot afford the rent for herself and two children. Sharon’s building burned down, and Anita lived in a basement apartment that was constantly flooded.

The pictures that don’t fit onto Dollie’s crowded office walls are stacked in a pile on her desk. She picks the mug shot of a boy and tells the story of how she met his mom, “Vicky,” in 1997. Dollie had just started working as a community organizer, and Vicky was homeless, addicted to drugs, and all her children lived in foster care.

After taking part in Dollie’s empowerment project, Vicky realized that what was most important to her were not drugs, but her children. She managed to get a job, get her kids back and start a new life.

Now she’s living on the West Coast, where she started a women’s empowerment group herself. The picture Dollie is holding in her hands shows the graduation day of Vicky’s son.