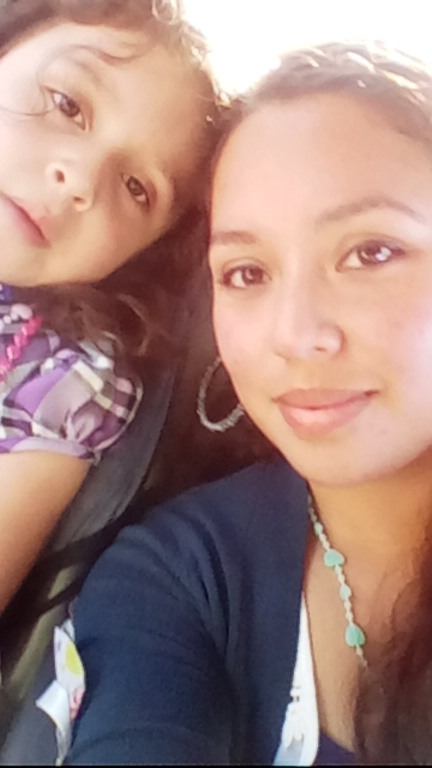 Her college internship ended, but Yaneth Aguilar still volunteers at the Chicago Coalition for the Homeless.

Working with community organizer Rachel Ramirez, Yaneth co-wrote a survey being used by CCH to determine how Chicago’s Latino community perceives what it is to be homeless. The survey also assesses awareness of services available to assist homeless families and students.

Yaneth, 25, explained the project in a recent interview at CCH’s Loop office. Her brightly colored shirt and dark hair stand out against the office’s cream-colored walls. Yaneth’s air is calm, confident, and sophisticated, despite the personal hardships she has faced.

“In the Latino culture, it is so common for families to live doubled-up that people don’t really see it as homelessness – they see it as the culture,” she says. “Even the people in those situations think, ‘We’re all like family.’”

Yaneth experienced this herself. Five years ago, while pregnant with her daughter, Amy, Yaneth found herself homeless. Her sister took her in until Yaneth could get back on her feet. Yaneth continued to work after she began college, seeking a better life for her young family.

“I would visit homeless shelters on my own to have one-on-one conversations with the homeless. I built relationships with some of these individuals. I would also give presentations at the shelters to gather people to attend events, like rallies for policy change at Springfield.

“I loved my experiences working with CCH because I could bring my daughter, Amy, along to the events,” she adds with a smile. “Amy is the kind of kid who likes to join in and help. If she sees someone passing out waters at an event, then she wants to be passing out waters. Once we took action in Springfield in the rotunda of the Capitol building. We had to lay on the floor and chant, and I thought she would be scared but, no! She laid on the floor and did it with me!”

Yaneth graduated in May with a bachelor’s degree in social work. She plans to be a community organizer who helps Chicago’s Latino population.

“Before CCH, I never would have thought about policy reform as part of my career path. Working with CCH has made me realize that policy is the best way to make a difference since it can affect so many people. It has also awakened my passion for helping people. It’s inspiring to see people turn their lives around.”

While looking for work in her field, Yaneth continues to volunteer for CCH. She is working this summer with Rachel, three St. Augustine students, and four homeless leaders from La Casa Norte and San Jose Obrero to survey Latinos in community settings, including Humboldt Park.

“There isn’t enough data on the Latino population for the issue of homelessness. So I let them know that it’s essential to participate, because having data is the only way we can make a difference.”

With plans to survey at least 200 Latino respondents, both housed and homeless, the data will be used to inform a new family housing campaign CCH will launch later this year. Yaneth hopes to remain involved so that she can witness policy changes impacted by her work.

“Chicago Coalition for the Homeless helped me become a leader,” she says. “Now, I hope to inspire others in my community to make a positive difference.”