The number of homeless students in Illinois has ballooned over recent years with many of these children and youth unable to access vital educational supports, according to a new survey and report from the Chicago Coalition for the Homeless. 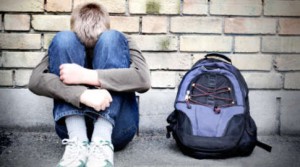 Given the recent findings, housing advocates say it is crucial that the state restore funding for the education of students with unstable homes.

“We’ve got this exploding population, but yet districts don’t have sufficient resources to adequately serve them,” said Patricia Nix-Hodes, associate director of the Law Project at the Chicago Coalition for the Homeless.

Updated figures from the Illinois State Board of Education (ISBE) show that public schools across the state identified 54,892 homeless students during the 2012-2013 school year. That is up 109 percent since 2009, according to the Chicago Coalition for the Homeless’ report, “Gaps in Educational Supports for Illinois Homeless Students.”

Nix-Hodes said the uptick is likely tied to the sluggish economy and the high rate of foreclosures in the area.

“You’re starting to see in these numbers that families and children and students are really being hit by these economic realities,” she explained.

As part of a statewide survey the Chicago Coalition for the Homeless conducted this past December, public school districts and regional offices of education were asked to weigh in about the level of services reaching homeless students and youth. Thirty-six of the 54 school districts or educational regional offices in the state that receive federal funding under the McKinney-Vento Homeless Assistance Act to help serve homeless students responded to the coalition’s survey.

In most Illinois school districts, more than half of the homeless students who need support are not able to access tutoring, preschool or school counseling, the survey found.

Moreover, 44 percent of respondents said their staffing capacity to identify and enroll homeless students is limited or very limited.

To help meet the needs of an increasing population of homeless students in Illinois, the report called on the state to advocate for increased federal resources.

The grant funds served 36 Illinois school districts in 2009 but have not been renewed since that time. Schools districts in Aurora, Glen Ellyn, Rockford and others won grants to bring on social workers, case managers and homeless liaisons to help identify at-risk youth in the area and ensure they are supported and attending school. Grant money also helped districts provide various health and social services to homeless students as well as transportation and expanded academic programs including tutoring and summer school.

The 2009 grants bolstered the federal money Illinois receives each year under the McKinney-Vento Homeless Assistance Act as part of the Education for Homeless Children and Youth program. In its report, the Chicago Coalition for the Homeless called the current level of federal funding for homeless student supports “deficient”, noting that Illinois receives $5 million to serve 859 school districts.

“Of those, only eight districts directly receive federal funding,” the coalition’s report reads. “The remaining funding goes to regional offices of education or lead liaisons that serve as many as 100 school districts, with limited ability to provide direct services to individual homeless students or families.”

ISBE has included the $3 million in grant funding for homeless student supports in its fiscal year 2015 budget request. ISBE’s proposal, however, needs final approval from the state legislature and the governor. Gov. Pat Quinn is expected to outline his proposed fiscal year 2015 spending plan during his budget address slated for March 26.

Nix-Hodes said the education grants previously awarded to school districts had a big impact in helping homeless students, even though some pots of money were “surprisingly small” at about $30,000. But even a modest amount of state funding, she said, could go a long way when it comes to identifying and addressing barriers, such as a lack of transportation, clothing, previous school records and various family services, that contribute to attendance and truancy issues for homeless students.

“We don’t really think $3 million is sufficient, especially since the numbers have more than doubled since the state last put money towards this issue, but we recognize it’s a tough budget situation,” Nix-Hodes added. “While we ideally think even more money should be put towards this issue, we think that it’s important to have a line item in there and to have some support to districts, and we do think districts are able to do a lot with even modest amount of funds.”

There are steps, however, that Nix-Hodes said school districts can take immediately to help address the needs of homeless students that require little, if any, additional funds. These efforts include raising awareness in school communities about the rights of homeless students and making sure districts have up-to-date school policies in place that do not serve as barriers to students with unstable homes.

The Chicago Public Schools’ (CPS) policy on education for homeless students, for example, is “very outdated,” Nix-Hodes said, and it should be revised and updated. But all school districts, she added, could “benefit from looking at any policy that they have and seeing, ‘Does this act as a barrier to homeless students?'”

The Chicago Public Schools district has a long history of allocating resources for long-term solutions while disregarding short-term problems and the increasing number of homeless students is just another example of this neglect. Last year’s mass school closings affected more than a thousand homeless youth, and the deficiencies cited in this report are just further evidence of disregard for the people—children, no less—that the ‘haves’ in our city and state have relegated to the fringes.

The state needs to do more, and if so-called education reformers really want to close the achievement gap and level the playing field in our schools, they need to start with the gap in the quality of students’ lives. Homeless students are at a greater risk for physical abuse, violence, malnourishment and serious psychological problems. If we are to improve education, then people must first work to improve life itself.

Although Chicago has the largest portion of students in Illinois who are experiencing homelessness, it is an issue that spans the state.

“Sometimes, I think, in more affluent areas, people think it’s not an issue in their area, so maybe we don’t have to pay attention as much or we don’t have to train as much, but it is a statewide issue,” Nix-Hodes stressed.