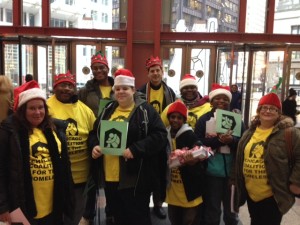 The Illinois School Board of Education and the Chicago Public Schools identified a record 51,638 homeless students during the 2012-2013 school year.

This Friday, community activists and elves from Aurora, Waukegan, and Chicago will deliver 908 letters to Governor Pat Quinn’s Chicago office as a Christmas present. The letters strongly urge Gov. Quinn to restore $3 million in the FY15 state budget to assist homeless students in Illinois.

In FY 2009, Illinois allocated $3 million to fund grants to school programs assisting homeless students, but the state has not provided any additional funding since then.

Public schools can use the funds to provide transportation, waive school fees, and provide school uniforms and supplies for homeless students.

Funds can also be used to hire trained homeless liaisons to assist homeless families and students at the school.

The brief press conference will include community leaders and elves delivering the letters to Gov. Quinn’s 16th Floor office.

For more information, contact Organizer Jim Picchetti
at (312) 641-4140 or jpicchetti@chicagohomeless.org