Growing up in a white middle-class home in rural Georgia, William “Les” Brown was taught by example not to turn his back on others.

His father, a banker, nearly took a beating in the 1940s when he committed the then-unpardonable sin of giving up his seat on a local bus to an African-American woman. His mother helped another black woman navigate the local social service agencies to get food when she became pregnant. 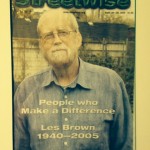 “Our parents were unusual for people at that time; they were not prejudiced in any way,” said his sister, Claudia Lewis. “They both felt very strongly about fairness and they felt strongly about social justice. I think he absorbed that.”

Mr. Brown, 64, who founded and served as a longtime strategist for the Chicago Coalition for the Homeless, died Monday, April 11, at Rush North Shore Hospital in Skokie after a long battle with cancer.

He was known on the local music scene for his quick wit and his skill as a blues pianist.

Mr. Brown started the group in 1980 while serving as director of social work services for the Travelers and Immigrants Aid Society. He began to notice a surge in the number of homeless people at Union Station, said Ed Shurna, executive director of the Chicago Coalition for the Homeless.

Mr. Brown’s health problems – polio as a youngster and heart problems later – helped fuel his desire to aid others, Shurna said. In 1984, he was one of the first heart transplant recipients in Illinois.

“He had this understanding that you can’t blame people for the problems that they had,” said Shurna. “It was more than individual failures, it was a failure to deal with poor people and their need for housing. Before this, they were considered bums and winos. He was a caring guy who cared about the people on the fringes.”

After receiving a master’s degree in social work from Loyola University in Chicago, Mr. Brown served in the Air Force as a medical corpsman in England.

The coalition he founded helped host the first national conference on homelessness in Chicago in 1983. When Presidential Towers, a government-subsidized complex, was being built in the West Loop in the early 1990s, he helped secure 165 of its 2,643 units for low-income residents.

Mr. Brown was also a founder and former president of the Illinois Coalition for the Homeless, a founding board member of the newspaper StreetWise and a board member for other local and state groups that aided the homeless.

A farm boy at heart who spent his younger years fishing, hiking and hunting, Mr. Brown looked back on his youth for the framework of Growing Home, an agricultural job-training program that lets homeless people learn a vocation, said his wife, Diana Leifer. His first marriage ended in divorce.

“He lived his convictions and whatever he advocated he lived out in his own life,” his wife said. “He saw problems and determined they needed to change. He didn’t just talk about it; he made it happen. A lot of people have ideas and don’t act on them. He had ideas and made them come to fruition.”

“Instead of just shelters and soup kitchens, he knew there was a need for some kind of serious job training where people learned skills,” said Harry Rhodes, executive director of the program.

“He loved the place. He loved everything about it,” Rhodes added. “He talked about retiring and living out there part time.”

Mr. Brown is also survived by a son, Jesse; a daughter, Mari Herreras-Zinman; and two grandchildren.