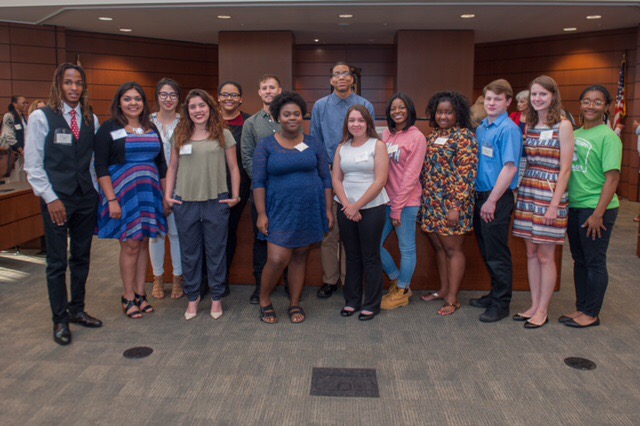 Chicago Coalition for the Homeless and its Law Project has awarded renewable $2,500 college scholarships to five students who succeeded in high school while coping with homelessness. Funded by private donors and grants, CCH has already awarded more than $235,000 to 50 students since 2004.

“We are thrilled to recognize the accomplishments of these young people,” said Patricia Nix-Hodes, director of the Law Project. “They have demonstrated resilience and persevered with their education, despite many barriers.”

Two of the program’s 2016 college graduates, Jennifer Salgado-Benz and Jayme Robinson, were the featured speakers at the awards event hosted by Loyola University Chicago School of Law, 25 E. Pearson Street.

After graduating fourth in her class at Phoenix Military Academy, Jennifer majored in neuroscience at Lake Forest College, finishing her bachelor’s degree in May. She plans to train as a physician’s assistant in the coming year.

Jennifer advised the students that, along with focusing on their academics, they should make good friends they can rely upon, and be confident that they are right where they belong.

“Try to meet new people and become involved in clubs and activities, because you have the right to be on that campus as much as any other individual. Your education and happiness should not be hindered by your race, ethnicity, or income. By having a close-knit group of friends that share the same goals and outcomes, you will be creating a support group,” she said.

After graduating from Schurz High School, Jayme studied sociology at UIC. She interned with CCH’s community organizing staff her senior year. She has accepted a position as the CCH VISTA organizer, helping manage the Speakers Bureau with which she was a speaker for three years.

Jayme said the scholarship and her campus jobs, including stints as a tour guide and a janitor, helped her afford to live on campus during most of college. She advised students to “make sure you’re well-rounded academically, and prioritize your mental, emotional and physical health.”

A third 2016 graduate, Gilma Escobar, will be honored next year. Gilma is in Texas training with Teach for America, which plans to place her in Milwaukee public schools this fall. Gilma graduated with an education degree from Concordia University Chicago.

Thirteen scholarship recipients have graduated with bachelor’s degrees, 39% of the 33 students eligible to do so to date. This compares well per a February 2015 study that showed just 9% of students from the lowest income bracket ($34,160 or lower) had earned a bachelor’s by age 24 (University of Pennsylvania and Pell Institute for the Study of Opportunity in Higher Education). Three additional CCH scholarship students have earned associate or nursing degrees.

Supporters of the scholarship program, the family, friends and teachers of our students, and program graduates were invited to attend the public, free-of-charge event.

The Law Project launched the program to encourage and showcase homeless youth with whom it works – in 2015, 93% of its 375 legal aid clients were homeless students or youth. CCH scholarships help graduating seniors who experienced homelessness while in high school, some of them for most of their lives. Long focused on helping Chicago Public Schools students, suburban students also have been eligible since 2015.

Nineteen high school seniors applied by the April 15 deadline. Our 2016 winners are:

Nia Hill – Whitney Young Magnet High School: Nia plans to major in accounting and business at Howard University in Washington, D.C. She is active in the Chicago Scholars mentoring program and involved in many school activities, including the softball team and On the Money magazine.

Claudia Kubarycz-Hoszowska – Ridgewood High School, Norridge: A talented violinist, Claudia earned many honors in music, including first violin in the ILMEA All-State Orchestra. She plans to study computer science and mathematics at the University of Illinois at Urbana-Champaign.

Dontay Lockett – Lake View High School: Dontay’s family was homeless most of his life. Co-captain and star of the track team, his coach commends Dontay for being the one to help the youngest, slowest boys on the team. He will attend Columbia College Chicago, studying to become an elementary school art teacher.

Ayrianna Longs – Walter Payton College Prep: Ayrianna was homeless off and on while growing up, and lives on her own as she finishes high school. She works at a clothing store and is active in her South Side church. She plans to study sociology at North Park University.

Amber Doris Rodriguez – Steinmetz College Prep High School: Amber became homeless her senior year, requiring her to commute to school from a relative’s Palatine home. She was active in After School Matters, track, and cross-country. She plans to study psychology at Blackburn College.

Accepting their awards, the new winners took turns thanking those who helped them realize they could go to college.

“It is days like these that I realize I made it,” said Claudia. “We all made it. We made it through hardships that many of our classmates never had to go through.”

Dontay thanked the Lake View track coach who guided him in sports and off the field, including his application for the scholarship. Later, coach Katherine Cervenka was one of several teachers to tell the audience of their admiration for students like Dontay, who has been homeless most of his life.

Noting that Dontay recently moved into her family’s home, Ms. Cervenka said, “These are tears of pride. I cannot express how proud of (him) I am on a daily basis.”

The college scholarship program is fully funded by private donors and by grants from the Osa Foundation, Sisters of Charity, BVM, the Susan W. Pearson Memorial, and the North Shore-based Student Alliance for Homeless Youth. All donations to the program are fully tax-deductible.

Thanks to a generous incentive created by the Osa Foundation, Catherine Jones from Illinois College will receive a new laptop for maintaining above a “B” average. She is the fourteenth student to earn this honor in seven years.

Shown below: Most of our twenty 2016-17 scholarship recipients